The ASA cracks a whip as the next wave of ads falls against the rules of gender stereotypes in advertising - are marketers forgetting the demand to be a positive and progressive presence for consumers?

“Our evidence shows how harmful gender stereotypes in ads can contribute to inequality in society, with costs for us all. Put simply, we found that some portrayals in ads can, over time, play a part in limiting people’s potential.” Guy Parker, chief executive of the Advertising Standards Authority (ASA).

What has been found?

If brands were to still rely on broad stereotypes as they have done in the past, they are in danger of excluding key customers from their target market and this could lead to them losing valuable business.

Marketers have increasing access to sophisticated software and data that has alleviated some of the need to make assumptions concerning their target demographic. It has presented brands and agencies with new avenues through which they can understand and engage with consumers more deeply.

In 2019, the need to reevaluate marketers' reliance on audience stereotypes was a focal point for the industry. Now that we find ourselves firmly in the first quarter with already two more companies failing to comply with ASA’s guidelines, this needs further attention…

The ASA has found two companies, PeoplePerHour and PC Specialist, to have broken rules that dictate brands should not continue to promote harmful stereotypes following recent complaints regarding the ads in question. 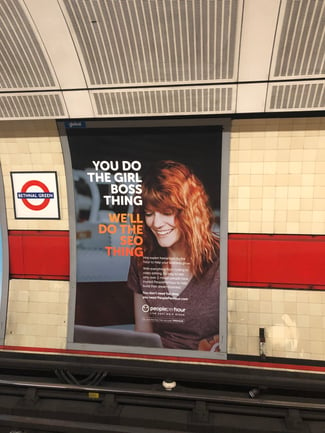 This poster ad was created by George & Dragon, for PeoplePerHour, an online platform that connects businesses and freelancers. It appeared on the London Underground last November, with the copy immediately issuing alarm bells.

“You do the girl boss thing. We’ll do the SEO thing.”

The ASA stated it received 19 complaints about its execution, there was speculation whether it conveyed harmful gender stereotypes through its patronising depiction of a woman running a business and the implication that women were not as technically skilled.

Following this, PeoplePerHour admitted that the ad may have unintentionally come across as sexist and demeaning to women and so, removed the word ‘girl’ from the copy while issuing an official apology on its site.

“For the players, the gamers, the ‘I’ll sleep lateres’, the creators, the editors, the music makers. The techies, the coders, the illustrators.”

Following its release, regulators were contacted by eight people who believed the ad alluded to harmful gender stereotypes through the implication that only men were interested in technology and depicting men in stereotypically ‘male roles’.

PC Specialist argued that the large majority of their customers were male and that they did not believe the ad to be offensive in any way. Nevertheless, the company pulled the ad and moving forwards will host more internal training to ensure this does not happen again.

Previously, marketers have fallen down the trap of making sweeping generalisations like, rich people are more likely to buy luxury items, men watch sports and drink beer and young people are the main users of social media and technology. These age-old stereotypes were once thought of as useful foundations for campaigns but now, they could be detrimental to businesses as consumers are searching for a deeper and more relevant conversation with brands.

This broader form of targeting was previously seen as more efficient as it was easier for marketers to target large groups of adults, for example, 18-49 year-olds, when employing mass media strategies. However, stereotypes have now been found to limit a brand’s reach to certain audiences, for example, some women also drink beer and watch sports - by ignoring these groups, a business’s impact is limited.

Is this the end of the Marketing Campaign? →