END_OF_DOCUMENT_TOKEN_TO_BE_REPLACED

Is Brexit An Opportunity For Brands?

With Brexit looming, CLICKON Social Labs investigate whether or not participants will alter their shopping habits in order to opt for more British owned food brands.

In general, Brits are considerably less loyal to their local produce than other countries, mainly due to the lack of a strong cultural food identity when compared to countries like Italy and France. However, Brexit may provide the opportunity to alter this, as the import costs will result in an increase in foreign food prices. There has never been a more opportune moment for brands to promote and emphasise their British heritage.

Quality and trust have often been associated with British made products, but recent research indicates that certain brands need to invest more time in order to market the potential benefits of buying British more effectively. Otherwise, they risk their consumers choosing cheaper, imported alternatives, where these still exist.

In the poll conducted by CLICKON Social Labs, 36.2% of participants were found to be more likely to purchase British owned brands after Brexit. This is notably below the global average found by Ipsos Mori at 63%, with the lowest figure out of the 30 nations found to be the Brits.

With the possibility of Brexit just around the corner, the variety of products available in supermarkets could see a decline due to the increased price for imported goods. According to government data, 50% of food in the UK is also supplied by the UK, and 30% is then from the EU. Now that there could potentially be fewer, less affordable choices for consumers, an opportunity for brands to emphasise their British heritage arises.

“Everyone knows we’re Lidl on price - we’re famous for our amazingly low prices - and customers love us for our deluxe ranges, British produce and award-winning products.”

“We want to tell Britain just what Lidl is ‘big on’. Big on quality. Big on range. Big on Britain.” 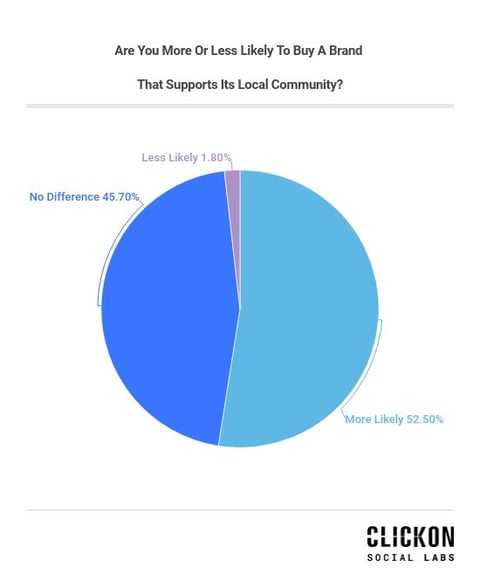 52.2% of participants surveyed in the CLICKON Social Labs poll said they would be more likely to buy a brand that supports its local community. For example, the brand Dairy Crest, who make products like Cathedral City and Country Life anticipates this change in behaviour from consumers and their marketing director, Lee Willett comments:

“Brits are likely to support our own farmers over any other people, but [marketing Britishness] needs to be handled carefully because you don’t know what’s going to happen in the future, so you don’t want to go too hard on that bandwagon.”

The cost of purchasing local goods could play a crucial part in customers’ willingness to switch from the cheaper and more convenient options, which will present a marketing challenge. In a study carried out by MarketingWeek, they found that if a household earned less than £20,000 per year, they were also less inclined to eat local produce (44%) compared to 61% of households that earn more than £55,000.

CLICKON Social Labs found that 58.2% of participants claimed that Brexit would make no difference to their purchasing habits, whether they are British owned brands or not. That is over half of the 700 participants, at whom British brands should target their marketing efforts, in order to sway them towards the 36.2% of participants that are already more likely to buy British.

Despite the uncertainty that Brexit has produced among consumers, cost and convenience remain the principal reasons behind their supermarket purchases. With more than two-thirds of Brits anticipating an increase in the cost of food next year, brands would do well not only to emphasise their British heritage but to stress the higher cost of foreign competitors.

With the current commotion surrounding Brexit decisions and the rising uncertainty of produce costs, local producers have been presented with an opportunity to forge a sense of loyalty to British produce.

Why Is Data Storytelling Effective?