END_OF_DOCUMENT_TOKEN_TO_BE_REPLACED

It's Not A Mobile First World, It's A Mobile Only World.

If brands are hoping to stay in the eye of the consumer, forget optimising your content for desktop, mobile is all you need to be thinking of.

CLICKON Social Labs noticed some new trends in marketing that mean more content is being optimised for mobile phone use. So in a poll they conducted of 5,467 people, they asked each age group who accesses the Internet by using their mobile phones only.

Mobile, as we know it today, has been present for approximately the last 20 years. However, in that time, it has stormed the marketing world and the worlds of our audiences. Meaning, that if we do not harness this opportunity, we will lose out on achieving maximum potential reach.

Back in the day, the first record of mobile phones were not really mobile phones. They were effectively a two-way radio, which allowed people, for example in emergency services, to communicate.

From 1908 when a US Patent in Kentucky was given one of the first wireless telephones, to 2019 being the year that 5G phones launch, mobile’s progress is unparalleled. Although the advertising industry thought of mobile as a top priority, now it should be mobile is the only priority. 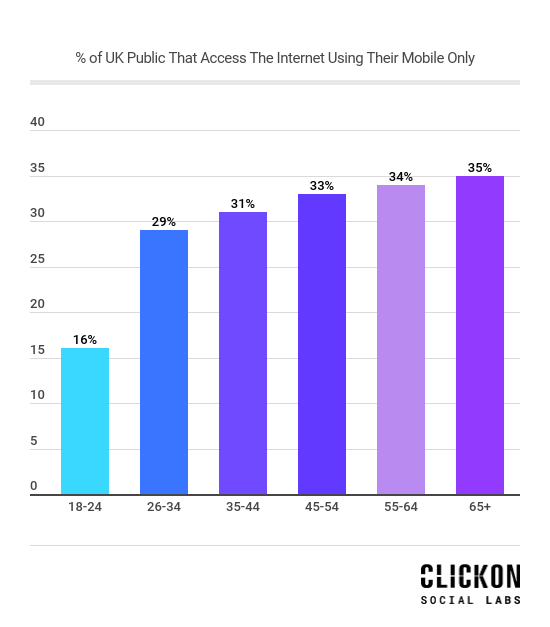 What may appear surprising, evident in the poll conducted by CLICKON Social Labs, is that the older, not younger, generations are mobile only. In a time where a current trend is centred on trying to engage Gen Z, of which some fall into the 18-24 bracket, it is apparent that efforts should primarily be focused on engaging the older generations through mobile.

There are more than double 55-64 year-olds than 18-24 who access the internet through mobile only. There are a number of reasons that this could be down to:

Regardless of the age group, one key element of mobile that needs to be considered is that their aim is to deliver key messages in short times.

In addition, the ability to pinch and zoom in on mobile provides audiences with the ability to look closer and really examine content that is advertised to them, meaning that the work of marketers is held under even further scrutiny. Therefore, in order to keep in line with the new ways content is being viewed, advertising needs to be held to a higher standard.

The fact that each of these age groups even considers mobile only, provides clear evidence that mobile has become omnipresent in people's lives. Marketers are able to target audiences directly, as most users will always be within arm’s reach of their mobile phones, whether they are commuting, at work or at home - they have access to their mobiles even when other media is not available. This concept is of utmost importance for marketers as it means that audiences can always be reached, and always be interrupted.

By 2019, mobile will be responsible for “72% of US Digital Ad Spend”, with the average person's use increasing by 11 minutes per day, each year. So as a brand, if you want to stay in the eye of the consumer, you should not be thinking of mobile first, but mobile only.

How To: Enhance Your Storytelling Skills