END_OF_DOCUMENT_TOKEN_TO_BE_REPLACED

If you’ve been anywhere near Twitter in the past seventy-two hours, there’s no way you could have escaped Gillette’s new advert. The controversial mini-film kicks off by asking, “Is this the best a man can get?” – a play on the brand’s “The best a man can get” tagline – and tackles bullying, harassment and toxic masculinity framed within the current#MeToo climate.

Released in January, it’s amassed nearly 12 million views on YouTube and remained the #1 trending video. The response has been mixed, to say the least, with many criticising the video and calling for the boycott of Procter & Gamble (Gillette’s parent company), while others praise Gillette for taking a socially-conscious approach to their marketing.

Gillette summarises their ad by saying: “Bullying. Harassment. Is this the best a man can get? It’s only by challenging ourselves to do more, that we can get closer to our best. To say the right thing, to act the right way.”

What Our Research Found...

CLICKON Social Labs we decided to ask the public what they thought of the ad...

We asked 1050 viewers "What did you think of this video?". The pie chart below shows that a majority of viewers had a positive reaction to it, with 53% of viewers liking or loving it; however it clearly isolated a large percentage with almost a quarter of all viewers hating it. 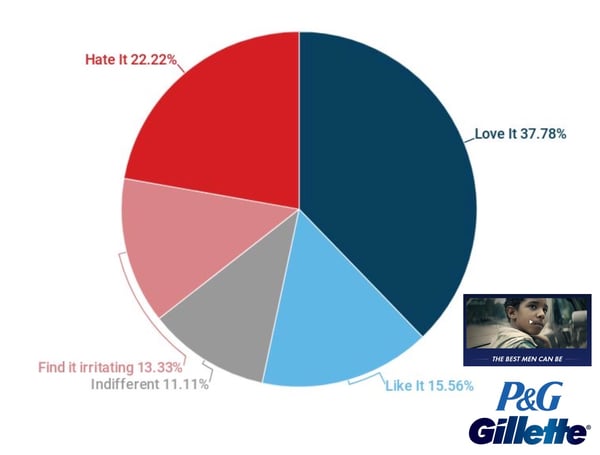 Time will tell what impact this campaign will have, however with a large number of direct to consumer brands entering the market focused on satisfying niche demands, large brands like Gillette will need to start taking a stand on issues to buy customer loyalty.

Does The Data Match Opinion From Our Offices:

“Gillette’s greatest crime is what this backlash will mean for all those brave marketers attempting to gain approval for aspirational, envelope-pushing campaign ideas. Gillette needed to set themselves apart from the growing number of subscription-based competitors; Harry’s, Dollar Shave Club and the like. Cynically piggybacking an important social movement was always going to be met with derision, however, they did achieve what many cannot; a campaign that enters the conversation. Much like Jenner’s protest Pepsi blunder, the vomit-inducing execution will negatively affect brand perception…but only in the short term. Just look at how Pepsi sales continued to grow in that Kendall quarter. So what’s better, going to the party and making a fool of yourself, or staying home? I say go to the party – you can always clean up the vomit.”

“My views are that Gillette has legitimacy when entering the space of masculinity as facial hair is one of the main biological difference between female and men – probably a reason why the beard is a big thing these days. Having said that, it is always controversial when a brand tries to take a political or cultural stance. Which opens another conversation – will brands ever be legitimate or will they always be a dirty vehicle for these kind of messages? Perhaps it depends how it is done – contrived with actors or with real individuals. This campaign started a debate and that in itself is positive. It’s only an opinion from a female perspective; I’m not the target audience but I do use Gillette to shave my legs and this ad engages with me more than any of their female-targeted ads. There is still lots that need to move forward in our society for male mental health, equality between men and women and sexual harassment. So my belief is that the more an issue is spoken about the more likely it’s going to be confronted and then addressed.”

“Personally I like the advert as it has helped raise the awareness of the brand by creating a viral piece. It has worked by getting huge engagement online through LinkedIn and other social media channels. It was a bold and brave move. A very similar approach to Nike’s recent campaign.”

“The advert feels patronising and preachy. The majority of males do not need a leading organisation in the product industry telling them how to conduct themselves. The message is right, but it is poorly executed.”

“This advert is a prime example of a brand jumping on the bandwagon of creating a socially conscious advert but slightly missing the mark. Granted I am not the target audience for this ad, but as a woman, it is refreshing to see an advert that calls out some of the toxic behaviour prevalent in our society as well as addressing the root of the problem. The advert tackles important issues that need addressing and it is great to see a brand take this on. However, coming from a razor company that has played an influential role in defining female beauty standards it feels slightly disingenuous. Whilst it is an important message to be publicising, it seems a bit hypocritical to be coming from Gillette.”

“For those saying that Gillette does not have the authority in this space to tackle this issue, you only need to cast the net wider to see that P&G have a rich history of addressing major gender and social issues with enormous success. Take the Always #LikeAGirl campaign that turned the spotlight on encouraging women to build confidence and own life, a rightfully award winning campaign. Harassment sexual or otherwise is an issue that effects the whole population, so everyone has a right to enter the discussion whether it be individuals or brands. For everyone out there throwing their toys out the pram because ‘it just paints all men in a bad light’, have a day off. It’s not saying that, and you know the issue exists, so stop thinking about yourself, and consider the wider implications. Bravo Gillette, brave marketing is what pushes the industry forward.”

How To Be An Authentic Storyteller

Esports: Is It A Man's World?