Is An Audiences' Self-Perception Affecting How Brands Target Their Demographics?

Increasingly, brands will have to anticipate their audiences’ self-perception - how they view themselves - before targeting them for advertising.

This week CLICKON Social Labs have conducted two polls, questioning 251 participants in two different age groups, with the aim of investigating further into the concept of self-perception and the part it plays in effective advertising.

Which gender and which age group see their level of intelligence closest to the benchmark?

What could be the reason behind their potentially inflated self-perception? 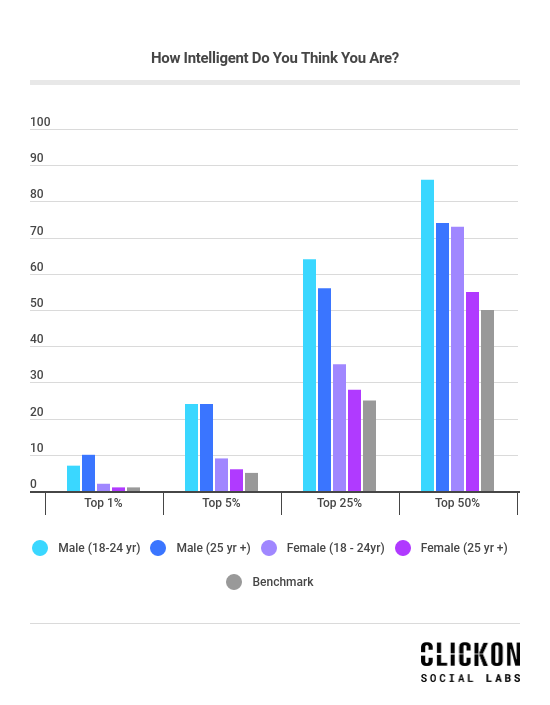 Across all four intelligence percentiles, the percentage of men is significantly higher than the women. This figure is almost doubled for men across the first three categories.

10% of males aged 25 and above believe that are in the top 1%, whereas just 1% of women of the same age believe they fit this group.

There are two key points to take away from this. Firstly, regardless of gender, both groups believe that they are smarter than the benchmark. So as a marketer, there is no need to alter your advertising to what you believe these audiences are capable of. Treat them as though they are in the top 5%, or 25%, because that’s where they think they are and this self-perception will reflect onto their perception of your brand.

A second point to consider is gender inequality in the workplace. This poll shows that overall men believe they are higher on the intellectual scale, so their self worth is also higher than women of the same age. This self-worth can translate to a view of their worth in the company, and a belief that they deserve more pay. On the other hand, women appear more modest through this poll. They undervalue themselves and how much pay they deserve.

Across the percentiles, the difference between male age groups does not vary when determining which intelligence category they fall into. However, for women there is a more notable difference in the top 50% group, with 73% of 18-24 year-old women compared to 55% of 25+ year-olds having high self-perceptions. This is the biggest gap across both genders and age groups in every percentile.

A trend is evident across each percentile, as the majority of 25+ year-olds are slightly closer to the benchmark in view of their intelligence. A reason for this could, quite simply, be down to increase in experience with age and an overall understanding of their place in intellectual percentiles.

This insight is important for marketers because it will allow them to interpret how their audiences’ self-perception maps onto their brand. Consumers will be attracted to brands that reinforce their self-image, for example, high intelligence. A clear route forward is to cater to this vision - advertise in line with the audience that believes they are in the top 5% intellectually, even if in an objective assessment, they are (only just) in the top 50%.

← How To: Use The Power Of Film In Storytelling

Facebook's Attempt To End The Spread Of Harmful Content Continues