END_OF_DOCUMENT_TOKEN_TO_BE_REPLACED

Navigating The World Of Esports

"We want to get into Esports."

Now breaking out of its nascent growth years, esports presents a range of incredibly lucrative opportunities for brands. The accessibility esports provides to market directly to Gen-Z around one of the cohort’s strongest passion points is proving to be an attractive proposition.

Sponsorship in the space has skyrocketed in recent years, with Newzoo’s 2018 Global Esports Report indicating that brands invested around $694 million USD globally in the space in 2018, accounting for 77% of the segment’s total revenue.

Brand spend figures are projected to grow to $1.4 billion USD by 2021, representing an even greater proportion (84%) of esports’ total revenue.

At CLICKON’s recent Esports Uncovered event, we spoke to a number of brands looking to navigate the esports space.

Having sagely identified that esports is the fastest growing non-traditional sport, many of our attendees were ready to take their first steps into the industry, joining a number of others in the room who had already started activating in the space.

As with any sound marketing strategy, brand marketing managers need to make key decisions about where their resources will be invested, ensuring that they tie back to key business and brand objectives whilst maintaining a clear understanding of the esports category and its nuances.

This topic formed a large part of CLICKON’s presentation and panel discussion; addressing perhaps one of the most frequently uttered statements from brand marketing meetings concerning esports:

“We want to get into esports.” 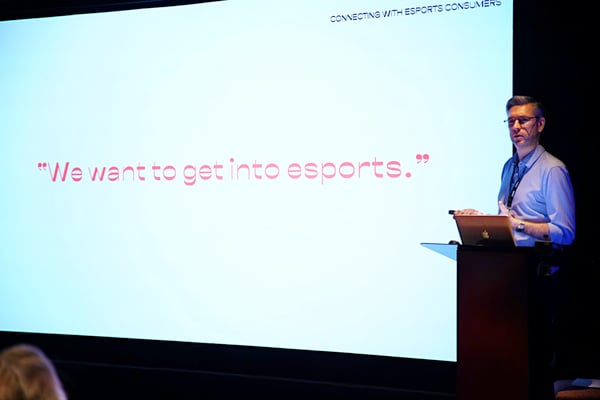 As a comparison - this statement is as vague as stating that you wish for your brand to get into music, without specifying whether you’re planning on aligning with the BBC Proms or an up-and-coming grime club.

After initially deciphering whether your interests genuinely lie in esports, rather than gaming, there are a number of layers which will require consideration; each presenting their own unique opportunities:

Perhaps you want to engage directly with game publishers. They own the rights to game IP, with many of them running their own esports leagues such as Blizzard’s Overwatch League or Riot Games’ LCS and LEC competitions. Other publishers license out the right to third-party league organisers to run competitions using their titles. Direct access to game IP can provide an opportunity to integrate your brand within the game itself.

You may want to just focus on one specific game title, one that aligns well with your brand - e.g Rocket League for a car manufacturer. This approach will still require you to work with publishers, tournament organisers, maybe even teams, but your focus is clear.

Leagues and Tournaments are another popular avenue for brand investment. These are the organised structures in which esports’ teams and athletes compete. As mentioned previously, some - like the Overwatch League - are run by the publishers themselves, yet many others exist as a result of games being licensed to tournament organisers. Of course, choosing the tournament that’s right for your brand is critical.

Alternatively, esports teams, comprised of multiple gaming personalities and competing across various titles under the same banner, present another viable option. Esports teams are each fighting to establish a fanbase of their own, with their own clearly defined identity. On the occasions where the team’s identity aligns well with their brand sponsors, activations are often very successful.

Brand marketing managers are required to do their homework before deciding which esports teams, influencers, publishers and/or tournaments to engage with.

All of the above can position esports as a daunting proposition, though in reality, it should simply be dealt with the same as any other consumer passion point. When aligning with an opportunity, brands should take the same approach they would when aligning with traditional sports sponsorships and activations.

IF YOU MISSED THE EVENT, DOWNLOAD THE FULL REPORT BELOW:

How Did You Hear About Game Of Thrones?