END_OF_DOCUMENT_TOKEN_TO_BE_REPLACED

The Esports industry has emerged as one of the key markets for brands looking to try and reach a younger and more ad-resistant audience. Today, we take a look at some of the non-endemic brands that are nailing it in the world of esports.

Undoubtedly, Red Bull have planted the flag when it comes to energy drinks in the esports space. Monster have a slight presence, but Red Bull is one of the most recognised brands in esports, full stop, let alone in just their sector.

Though their investment in the space has been significant, their commitment to esports has paid off for them.

Nike have taken a slightly unorthodox approach to esports. Rather than strengthening their position in the western market, Nike have thus far focused almost exclusively on capturing the esports merchandise market in China.

With a marquee sponsorship of Chinese League of Legends superstar Jian “Uzi” Zihao, and a comprehensive deal producing all of the competitive jerseys in the Chinese LPL (League of Legends Pro League), it’s safe to say that Nike have locked down the region.

It remains to be seen whether Nike will make a serious attempt to break into the Western esports market, but from what we’ve seen so far, they don’t need to. The company chose its objectives wisely, and has completed them in a very short amount of time. 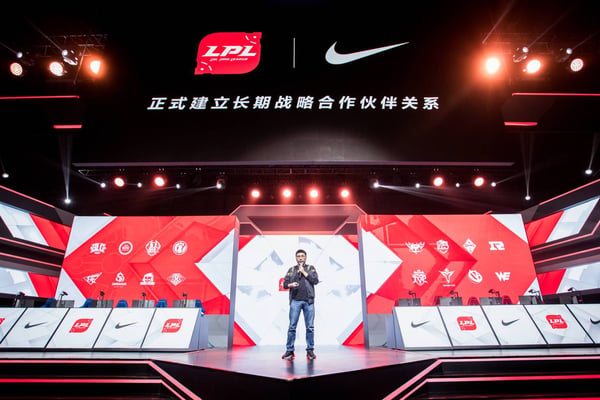 A car manufacturer might not be the kind of company you’d normally associate with esports. The audience is generally younger - perhaps not even of driving age - and lacks large amounts of disposable income.

Nevertheless, KIA took a risk and partnered with one of the biggest esports leagues in the world - the LEC (League Championship Series).

Rather than just slapping their logo on a couple of banners around the arena, or insisting that the commentators jam their name into the broadcast at every opportunity, KIA have worked with Riot Games to create meaningful content to run alongside the competition.

For example, the company recently interviewed a professional player and his father, as part of their campaign.

HTC aren’t the first and certainly won’t be the last mobile company to make a play in the esports space. With the focus on mobile gaming only increasing, it’s a vital market for these companies to be investing in.

The Taiwanese company did however pick their targets rather well. An early partnership with leading U.S organisation, Team Liquid, earned them kudos as the backers of a top team.

The company has also leaned into the ironic “sell out” position that Team Liquid has taken. Their target audience doesn’t like to be covertly advertised to, so Team Liquid don’t operate covertly.

The crowd enjoyed this moment, despite it being the most blatant form of advertising there is. The interview became a meme, and similar tactics are now employed by the likes of G2 Esports, another elite esports organisation.

Do advertising stereotypes need a revamp?